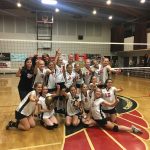 February 11, 2018 Santa Clarita, CA – This past Friday the Jr. High girls “A” and “B” volleyball teams played against Legacy’s “A” and “B” teams for the Santa Clarita Athletic Independent League Championship. Both teams won and claimed the champions for their levels in front of a packed SCCS gym. The “B” team won

No Events This Week

Events are added by athletic staff.
View All Events