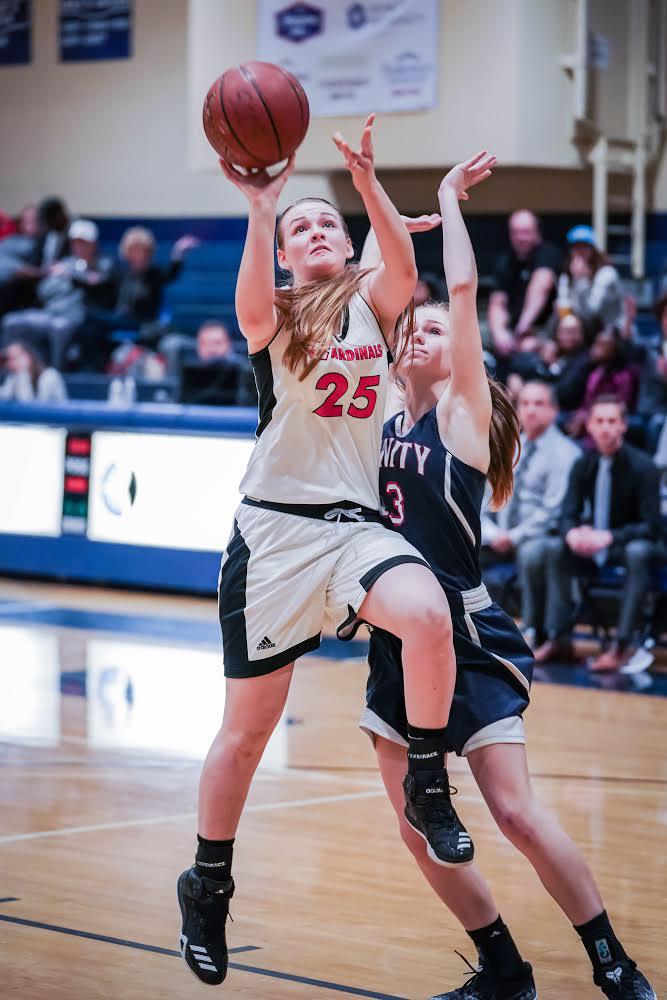 The Lady Cardinal Basketball team stepped onto the hardwood on Saturday, February 3 at Master’s University looking for a different outcome than their first game of the season against Trinity. In that first game, the Cardinals struggled to beat the full court press put on by the Knights and that led to an eventual loss, 44-30. On this night, however, the Cardinals proved to be the better team defeating the Knights 33-30.

In the first quarter, the Cardinals struggled to put points on the board and to contain the Knight offense.

Going into the second quarter the Cardinals quickly tied the game at 10. Then both their defense and offense stepped up. They contained the Knights to only 4 points for the quarter. The Lady Cardinals then tripled up the Knights and put up 13 points. At the half, The Cardinals led 25-19.

The Cardinal defense continued in the third holding the Knights to only 5 points. But the Cardinal offense was only able to increase their lead by one point as they were only able to put up 6 points. This led to a tense last quarter.

The Knight offense woke back up in the fourth quarter, dropping 11 points. With just under a minute to go the Cardinals only held a 1 point lead. Then with 10 tics left on the clock freshman, Emily Bernards for herself on the free throw line with the chance to seal the victory. She made both and gave the Cardinals the much needed 2 points. At the sound of the final buzzer, they led 33-30.

One of the most impressive stats of the game, the Lady Cardinals scored 16 of their 33 points from the free throw line. They were able to take advantage of the Knights aggressive defense by drawing the foul and gaining much-needed points.

The season series ends tied at 1-1. The Cardinals league record improved to 5-4 and 6-7 overall.

The Lady Cardinals basketball next game is against Faith Baptists at the SCCS gym this coming Tuesday, February 6 at 5:30 pm. Come out and support your lady Cardinals.