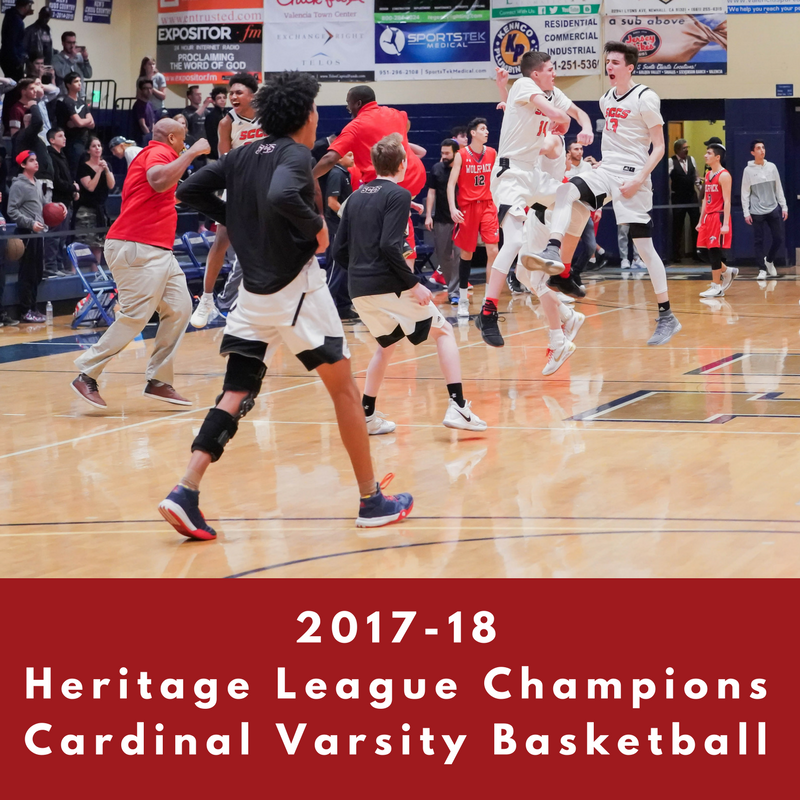 Santa Clarita, CA – The Santa Clarita Christian Cardinals boys basketball team are the 2017-18 Heritage League Champions. However, it did not come easy. To clinch the title, they had to defeat the Valley Torah Wolfpack. The Wolfpack were just as hungry as the Cardinals and had no intentions of backing down. Although the Cardinals trailed almost the entire game, they came out on top with a 54-51 victory.

In the first half, the Cardinals struggled offensively. They did gain an early 1-0 lead, but that would quickly disappear. The Wolfpack took over and put SCCS in unfamiliar territory for a Heritage League game, they would have to fight to come back. Their comeback would not happen until the waning moments of the fourth quarter. By the end of the first half, their offense could only muster 21 points. There was a bright spot, however, defensively they were containing Valley Torah’s star player and D1 recruit, Ryan Turell. This was a key factor in the Cardinals eventual victory.

Cardinal players such as Noah Veluzat, Justin Collins, as well as the rest of the Cardinal team, played solid, determined, smart defense. The Wolfpack play a screen-heavy offense with a lot of rotation. That required the Cardinals to communicate and constantly rotate who they were guarding. It was a game of chess and as the second half progressed, the Cardinal defense appeared to be a move or two ahead of Valley Torah.

Offensively in the second half, the Cardinal offense became much more aggressive, driving the lanes and into the key. This drew fouls and got the Cardinals on the free throw line. The Starr brothers, Jordan and Caden, scored almost all of their second-half points from inside the key. Late in the game, Kevin Stone and Kaleb Lowery both hit key free throws that would both help in the Cardinals comeback and solidify their victory.

With 45 seconds left on the clock, Stone hit two free throws that tied the game. Just before this, Ryan Turell of the Wolfpack fouled out of the game. Both vital moments in the Cardinals victory.

The Wolfpack inbounded the ball and the Cardinals applied a full court press. Valley Torah pushed the ball down the floor and was able to draw a defensive charging foul on Justin Collins. This allowed Valley Torah to reset. Both teams and the crowd knew the next basket would win the game. Valley Torah put the ball back in play and the Cardinal defense stepped up in a big way. Noah Veluzat played tight one-on-one defense driving Wolfpack guard Liorel Bitton across the court. Kaleb Lowery ran up to double team Bitton and forced the ball out of his hands. Justin Collins came flying in, scooped up the ball, and took it in for an easy layup. The Cardinals took a 53-51 lead.

The Wolfpack quickly drove back down the floor, missing a shot attempt, allowing Kaleb Lowery to grab the rebound and draw a foul that put him back on the free throw line. He went 1 for 2 and that increased the Cardinal lead to 54-51. The Wolfpack had two final attempts from beyond the arch, but the Cardinals applied to much pressure and never allowed a clean shot for the Wolfpack.