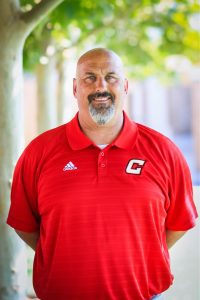 Mark Bates can reached by email at mbates@sccs.cc

James Mosley-  Coach Mosley has been the backbone of the Santa Clarita Athletic Department for over 20 years.  James has been a mainstay on the sidelines of the varsity basketball team for over twenty years and amassed over 150 wins, during his tenure.  Off the court, Mr. Mosley, teaches P.E. and Health.  Before coming to SCCS Mosley grew up in Michigan in the rugged 8-mile community. Coach Mosley made his way to the Santa Clarita area attending The Masters College to play basketball.  Mosley and his wife Wendy; enjoy two current Cardinals JR (9) and Isiah (5).  Athletic Director Josh Kristoff adds, “We are lucky to have someone with the experience and success of Coach Mosley.”  He is a true role model and lives out the goals of the Athletic Department in discipling Christian Student Athletes.

Mr. Mosley can be reached at mosley@sccs.cc

Tommy Driffill – Coach Driffill has served as the assistant basketball coach to Coach Mosley for the previous six seasons.  Tommy will be entering his first year as the Assistant Athletic Director.  Although coach Driffill is a new face on campus, his wife Stacey (Leonard) is most recognizable to past Cardinals faculty, fans, and alumni.  Stacey now Driffill is a former female athlete of the year for the Cardinals.  Tommy is excited for the opportunity to be a part of the Cardinal family and discipling Christian Students Athletes.  Off the court, Tommy enjoys staying at home with his two future Cardinals Emma (2) and Heidi (4 months).